How to Store a Car Battery Correctly

The most enjoyable way to keep your car's battery charged is to drive your car, but what about those times when it has to sit with no chance for the alternator to keep it charged? If you don't take the proper precautions, you'll not only come back to a car that won't start, there's also a good chance that you won't be able to get into your car if it's locked. To avoid that, you should consider how to store a car battery while it's not in use.

There are many reasons your car might end up sitting for extended periods with the battery draining. If you have a classic vehicle or race car, you might have to store it for the winter or even just for several weeks when you're between car shows or race events. The same can be said for those who have cars that only get driven on weekends. Plus, there's a growing number of people who work from home, and that makes it easy to leave your car sitting longer than is ideal for the battery. If you're wondering how to store a car battery so it has a charge when you need it, there are a couple of options.

When storing a car should you disconnect the battery?

The first thing many people contemplate when storing a car is if they should disconnect the battery. Removing your battery and storing it in a dry, temperature-controlled area is a fine option for older cars that will sit for several months. That will slow down the discharge effect since there are no auxiliary energy robbers, but you'd still want to attach a battery maintainer to ensure that it's fully charged when you need it again.

In most cases, and especially for those who might need to start their cars up and drive them periodically, it's much more convenient and effective to leave the battery in the car with a charger attached. 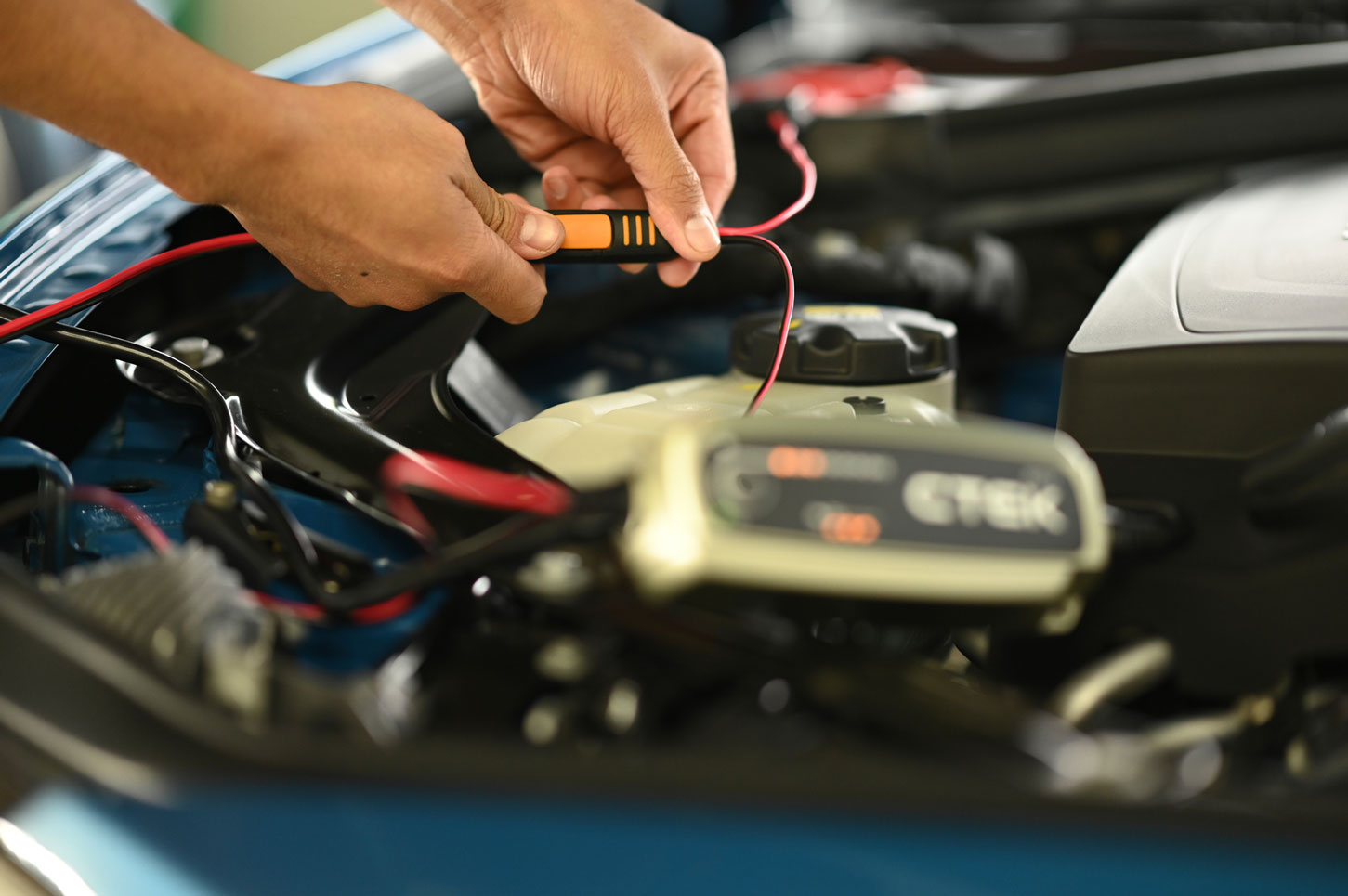 Leaving the battery in the vehicle while charging is a particularly good idea in modern cars, as the car's computer system is never completely off—it just goes to sleep like your personal computer or mobile device. That means there's no waiting for systems to boot up when you need them, and many of the electrical systems in your car remain fully operational for up to ten minutes after the car has been turned off. That's great for your convenience, but it's not great for battery life.

Aside from keeping the computer systems ready to go at a moment's notice, the biggest reason not to disconnect your battery and to keep your car on a charger when it's not being driven at least every three to four days is to make sure you don't get locked out. If your trunk or doors are locked, you'll have an extremely hard time getting into the vehicle if the battery dies—especially for some newer models with the battery in the trunk and no exterior keyed lock!

How long will a car battery last in storage?

How long a car battery will last in storage is tricky to gauge. If the battery remains installed and operational while stored, it can be fully discharged within four weeks if a charger or maintainer isn't used. And that's only if the battery is in prime health. Even then, it can be discharged enough in one to two weeks that you might not be able to start your car.

Even when your battery is fully disconnected and stored properly, if it's not attached to a battery tender, its longevity completely depends on the age and health of the battery. A new, strong battery could last anywhere from a few to several weeks in storage, but that's a costly experiment you can avoid by simply using a battery maintainer.

Can a car alternator charge a dead battery?

Short answer—no. Your car's alternator is intended to maintain the charge of your battery. Attempting to jump-start your car and charge a dead battery with the alternator will likely lead to premature alternator failure as well. And depending on how many times your battery has been depleted and how long it has been in a discharged state, there is likely to be internal damage to the battery, and it will never be as good as it was before discharging. To keep your car and battery happy and healthy, use a maintainer to properly keep the battery charged when the car is not being driven.

Is it bad to let a car sit for months?

Beyond the battery issues already mentioned, it's not necessarily bad to let a car sit for months, but it's not ideal, at least not without following a few simple steps. With a race build, classic car, or any other vehicle that simply can't be driven for months, here are some easy guidelines to follow:

When your battery is completely dead, you don't really have much choice other than buying a new car battery, but you can often save a lot of time and effort by taking care of your existing battery properly instead. Buying a new car battery can be expensive and often unnecessary. Plus, there's the hassle of registering your new battery (yes, it is necessary to get a new battery registered to your car if it's newer—failing to do so will likely put you in a situation of needing to replace your battery much sooner than expected).

When you need to store a car battery, whether in the car or not, prevent that hassle and expense of buying a new one—and avoid getting locked out of your car—by investing in a quality battery charger/maintainer.

×
Ask The Automotive Experts anything on Exo. We will follow up
with you via email within 24-48 hours.
Please answer the following questionnaire
to top
×

Receive our latest updates about our products and promotions.

We promise to only send you good things