As car enthusiasts, we’re always looking for aftermarket upgrades to make our vehicles perform better. One of the first modifications most turn to is the exhaust. Opening up the exhaust system allows spent gasses to exit the system more quickly. We’ve covered several exhaust components before and now we’ll consider the different types of downpipes. But first, let’s first explain exactly what the downpipe is and its purpose.

WHAT IS A DOWNPIPE? 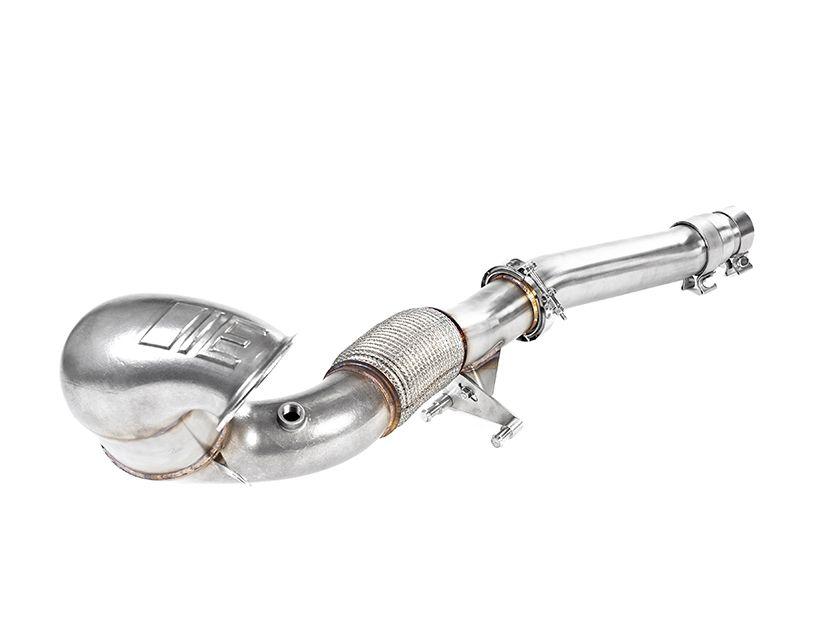 The wastegate can be internal (located inside the turbine housing next to the wheel (pictured above) or external (mounted on the header or somewhere before the turbine wheel and after the exhaust valve). Both accomplish the same function which is to bleed off excess gasses and slow the turbine wheel. This results in the slowing of the compressor wheel and prevents exceeding boost targets. This is done by actuating (opening) and allowing air through the wastegate instead of having it pass over the exhaust turbine wheel. It will then quickly close as to not bleed off too much air and cause a loss in compression in the intake tract (boost). The strategy used to control the wastegate can vary greatly between manufacturers. Now that we’ve covered the wastegate function, we can get to the exhaust downpipe.

The spent gasses travel out of the turbine housing outlet into the downpipe. Side note: this part of the exhaust is usually called a downpipe because, you guessed it, it’s a pipe that travels downward. As turbo configurations change, the name might also. Whatever you call it, a downpipe is the first portion of the exhaust post turbo and is typically the most restricted portion on factory turbocharged vehicles. Upgrading this component, paired with proper tuning, is typically the best bang for your buck modification (although it does vary for platform).

Castings have the advantage of keeping a lot of heat in the exhaust as well as freedom with design. You can basically make it almost any shape you want. The disadvantages are more weight and cost. Cast iron pieces can weigh a ton which is a valid concern with performance in mind. The casting form that the piece is made in is also very expensive and depending on complexity can range from a couple of thousand dollars to upwards of tens of thousands of dollars.

Forming pipe has almost as much design freedom as a casting with less expense and less weight. The only disadvantage lies in if it is not done properly. Poor forming can look bad and affect flow by having creases and crimped spots. You can also get the piping too thin if you try to stretch the metal too far. If done improperly you can also make the metal brittle and it will usually happen where the metal is the thinnest.

Remember, you will only flow as well as the greatest restriction. If you have a poor cat or muffler design then it will choke the flow no matter how good the rest of the system is designed. Fortunately, straight-through mufflers and newer high flow cats flow very well. Having a cat is not only good for the environment, but we have seen very little power difference in levels in excess of over 350 horsepower. More on catalytic converters later.

Pipe diameter does have an effect on flow rates but is not the major factor in most cases. 2.5″ may flow enough for 300-350 horsepower without being a restriction. 3″ is usually capable of flowing 500-600 horsepower before becoming a restriction. This is assuming that you have designed the rest of the system up to par. There are also full 3.5″ systems and those that start out at 4″ and taper down. Unless you are making over 500-600 h.p. anything over 3″ is a case of diminishing returns and in most cases has no advantage.

Now that we’ve covered different designs of downpipes, we come to the most glaring difference; those with catalytic converters, or “cats”, and those without. These are also referred to as catted vs catless downpipes.

WHAT IS A CATALYTIC CONVERTER?

The main purpose of a catalytic converter is to decrease the emissions from your engine. Let’s take a look at how this is accomplished.

A catalytic converter contains a ceramic honeycomb-like structure and is placed inline the exhaust system. This structure is designed to maximize surface area and is coated with noble metals like platinum, palladium, and rhodium. These metals act as a catalyst which triggers a chemical reaction converting harmful exhaust gasses like nitrogen oxide and carbon monoxide into nitrogen, carbon dioxide, and water.

Back in the mid-70s this technology was required by law in the US and adopted for widespread use. This was met with pitchforks from the enthusiast community as these early versions of catalytic converters severely restricted exhaust flow. Luckily, today’s high flow catalytic converters provide enough flow to not significantly impact power output while remaining environmentally conscious.

Now that we know the ins and outs of what a downpipe and catalytic converter are, we’ll cover the most common difference among aftermarket downpipes; catted vs catless.

As the name implies, a catted downpipe contains a catalytic converter and a catless downpipe does not.

One of the most concerning differences for many enthusiasts is price. From above, we know the catalytic converter contains noble metals like platinum, palladium, and rhodium. These metals are pricey! Even though they are in small amounts, the cost of these metals can add significant costs to the downpipe. This is a small downside relative to the downside of a catless downpipe though.

A common misconception is that a catless downpipe will immediately make more power. This is NOT the case for most vehicles. Modern, performance high flow catalytic converters are not a significant restriction at the power levels 99% of our cars are going to be making. Aside from not making any additional power over a high flow catted downpipe, a catless downpipe is bad for the environment and can also be bad for you, your community, and your engine.

DANGERS OF A CATLESS DOWNPIPE

Our customer service team often fields a certain call with a concern that “my car is running rich.” This arrival of this conclusion is come to by a smell. You might be able to tell a rich AFR via smell with a massive injector leak leading to unburnt fuel and it pouring out of the exhaust but, more often than not, the cause for this newfound smell is due to the fresh installation of a catless downpipe. Without the catalyst in place to convert those harmful gasses, they come out of the tailpipe. If you’re able to smell these gasses, it’s a safe bet they’re also going into you and your passenger’s lungs. This is not only unpleasant but can be detrimental to your health.

If the negative environmental and health effects weren’t enough, a catless downpipe can have steep legal ramifications. In some places, removing or disabling a catalytic converter is subject to a fine. Your vehicle may also be subject to impound which can rack up additional fees.

Boost creep is defined as a condition of rising boost levels past what the predetermined level has been set at. For example, if your target boost level is 15psi, you would see the boost levels increase beyond that as RPMs increase. The short explanation for boost creep is that the wastegate is not able to flow enough air to bypass the turbocharger’s turbine housing. When the volume of air flowing through the turbine housing continues to increase, boost will also continue to increase. This is undesirable and even dangerous for several reasons.

This boost creep or overboosting can exceed the factory fuel system’s capacity. This can result in dangerously-lean air-fuel ratios which can lead to engine damage. Excessive boost can also cause detonation that cannot be effectively controlled with the factory ECU’s normal response methods (reduced timing). If extreme detonation has been observed, from poor fuel quality or excessive boost, for example, one of the factory ECU’s methods for protecting the engine is to lower boost to the mechanical minimum. When the system exhibits excessive boost creep, this is no longer possible and engine damage is likely.

Boost creep is also undesirable from a tuning perspective. Firstly, the calibrator has little or no authority to control boost levels throughout a large part of the run. There is also a highly variable boost response depending on environmental conditions as system transitions below/above wastegate flow limit thresholds. When the wastegate’s flow limit has been reached, exhaust gas back pressure will undesirably rise (inefficient, leads to more detonation).

For all of these reasons, we always recommend using a downpipe with a high-flow or OEM catalytic converter. This will not only help meet emissions test standards, but also for performance and safety of the car. In most vehicles we support, using a catless downpipe can cause boost creep, or uncontrollable boost. This is typically something that tuning cannot fix as it is a mechanical issue that can only be resolved with a catted downpipe

×
Ask The Automotive Experts anything on Exo. We will follow up
with you via email within 24-48 hours.
Please answer the following questionnaire
to top
×

Receive our latest updates about our products and promotions.

We promise to only send you good things